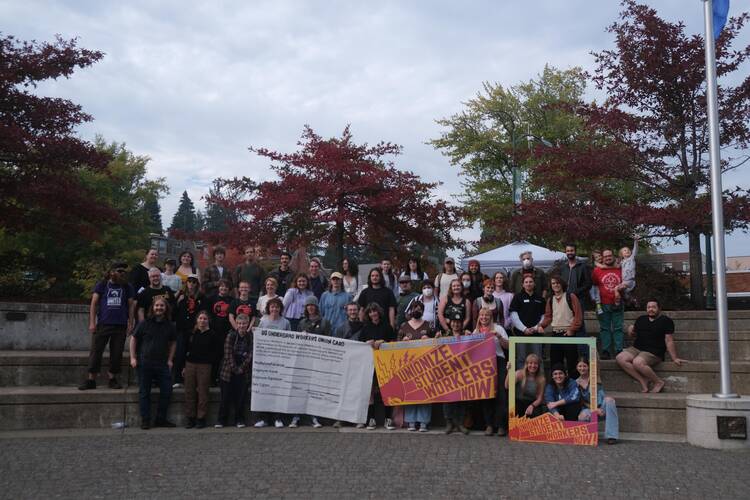 On the 20th of October the campaign hosted a kickstart rally with representatives from the GTFF, UA and other local organizations. Union cards were signed, pizza was distributed and speeches were given. Mae Bracelin from the UOSW gave a speech addressing some common concerns.

Hey! I recognize a lot of you either from organizing, card signing or the occasional off campus party. If you missed the beginning of the event, my name is Mae and I am an organizer for the University of Oregon Undergraduate Student Worker Union. I mostly focus on outreach, talking to people about the union and spreading information about what we all are trying to build here. In this line of work, I hear the same two objections over and over again. I wanna address those today.

First, the thing I hear most often is “I like my job, why do I need a union if my job is already pretty decent?” The answer to this question is simple. This union is being built by all of us, it’s the collective effort of every single Undergrad Student Worker and every single non-worker volunteer. It cannot be built without the effort of every single one of us. This union is not just for Dining Hall workers. This union is not just for University Health Service workers. This union is not just for Clerks or UHS workers. It’s for every undergraduate worker no matter where you work. Maybe the conditions are nicer in certain areas, but a union card signed is not just a vote for unionizing your sector, it’s a vote for unionizing every sector. Without the support of clerks at Lillis or ASUO workers, Dining Hall workers and RAs wont get a union. On top of that, even if you have a comfy job, without a union you do not have real representation. The union allows us to have a seat at the bargaining table with Management, a way to deal with any hypothetical grievances that may come up. Divided we are weak but together we can achieve anything.

Second, something I hear a lot is “I’m worried about signing this card, I don’t wanna get in trouble or get fired.” This is a valid concern, the University and a lot of shift managers are scared of what we can do. The union will empower workers to be on an equal playing field with administration and the managerial class, that’s something that they are scared of. Though I understand it’s scary to publicly support something that admin doesn’t like,let me remind you of your rights. It is completely and patently illegal to punish a worker for supporting a union and we will go to bat for you. The University is not above the law and they know that, they are not gonna walk themselves into a labor lawsuit, especially not when there are this many eyes on them.

The University of Oregon is not the Board of Directors, It is not management, it’s not even Student Government. It is all us here today, the workers that make this place run. If dining hall workers, or clerks, or RAs or Rec center workers walked out today the University would grind to a halt. This institution can only operate at the consent of its workers and students. Don’t let the rich businessmen who think they own us forget that. We are the university and we are not gonna let management treat us like shit and pay us as little as possible just so they can pad their wallets with the profit of our work. That is why we are here today, it is why we are coming together to stand in solidarity, all undergraduate workers, to fight for our interests. We are going to win the election and we are going to have our place at the table with management whether they like it or not.