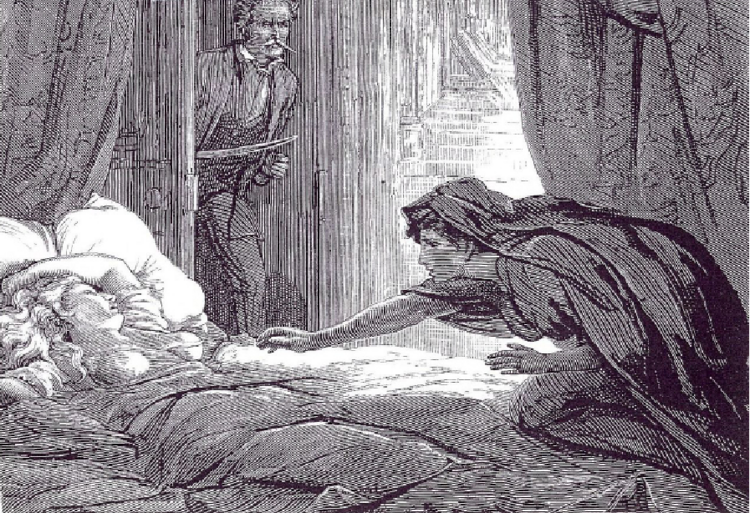 “I felt rather unaccountably towards the beautiful stranger. I did feel, as she said ‘drawn towards her’ but there was also something of repulsion. In this ambiguous feeling, however, the sense of attraction immensely prevailed. She interested and won me; she was so beautiful and so indescribably engaging.”

Twenty-six years before Dracula was published, there was Carmilla. The novella, written by French author Sheridan Le Fanu, chronicles the story of a noblewoman named Laura living in Germany who receives a mysterious yet beautiful countess named Carmilla as her guest. Carmilla is revealed to be a cunning vampire, endowed with the ability to seduce and charm anyone. However, she never pursues men and solely makes women the objects of her desire and affection. During her time at Laura’s castle, Carmilla draws her into her thrall, sneaking into her room in the dead of night to drink her blood, easily a symbol for the erotic. Carmilla may be a monster, but one with an unusual beauty and grace, and as is repeated in Laura’s narration many times, a “languor.” Despite her role as the antagonist, you can’t help but feel an affinity for Carmilla – at least I do. She’s an exceedingly clever femme fatale, fooling everyone around her. In a man’s world, she knows exactly what she wants and how to get it. As said by Adrienne Antrim Major, “It poses a paradigm of feminine power and lesbian love that might well create terror in the hearts of his [Le Fanu’s] contemporaries.”

When I began reading Carmilla, I expected the homoerotic subtley I’ve seen in many other Gothic era books. However, the way that Carmilla speaks to Laura is intensely romantic and erotically charged. There’s no hiding the passion she feels, and it’s what is supposed to make her so evil.

“Dearest, your little heart is wounded; think me not cruel because I obey the irresistible law of my strength and weakness; if your dear heart is wounded, my wild heart bleeds with yours. In the rapture of my enormous humiliation, I live your warm life and you shall die – sweetly die – into mine.”

While there’s a sinister element tinged in Carmilla’s words, the pull of attraction the women feel towards each other, especially in an environment where it’s forbidden, is something that jumps out. Queer love runs deep, often because of the stakes involved in exploring it. Vampires are just as complicated, their outcast nature showcasing people’s fear of the unknown, the other. They are very tied up with queer identity and feelings. Even today, queer people are made to feel like monsters for who they are. Carmilla has no regrets about her actions, which are framed as unforgivable. In a time where pursuing queer feelings was a crime, the only queer figures seen in literature were themselves wrongdoers. For, if it was a positive portrayal, the writing wouldn’t have been published at all. It’s a tragic conundrum – is it better to have negative representation, or none?

Despite its old fashioned outlook and conclusion, Carmilla is a cornerstone of both vampire and queer literature. Not only was Dracula inspired by it, but also more overtly queer vampire books, such as Anne Rice’s Interview With The Vampire. For whatever Carmilla lacked, it still provided a blueprint for everything that followed. It gave us a dynamic and sexy villainess, an infatuated protagonist, and vampire hunters seeking the moral high ground against someone far more beguiling than them.