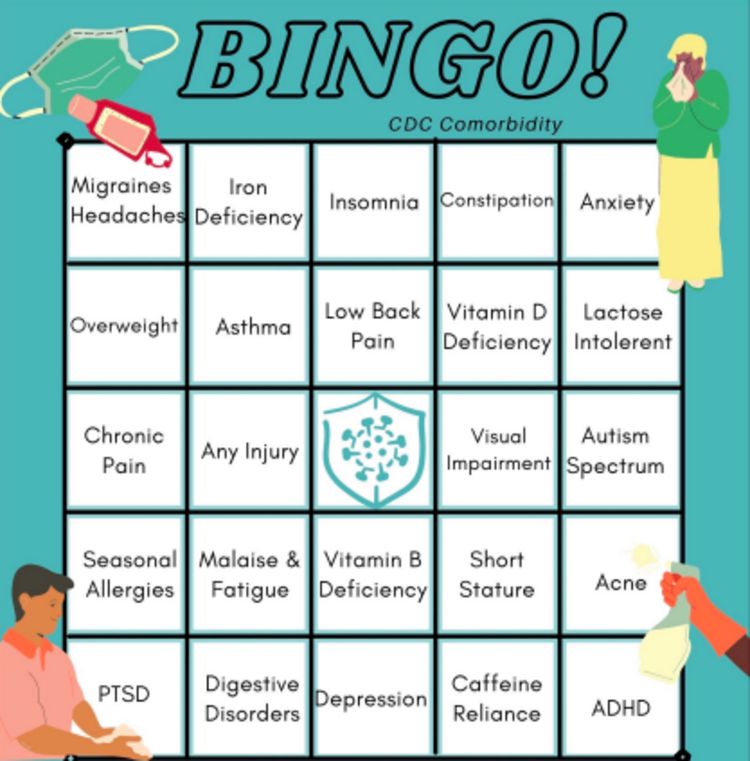 At the beginning of the Covid-19 pandemic and its subsequent variants and surges, one thing that many people said was “it’s okay, this only kills those who are already vulnerable. It’s not That bad and we can’t let the economy die because of the threat to Them.”

This, on its own, is a horrible and ableist thread of thought that inevitably leads to eugenics, but when followed by the worryingly prevalent and easily spread but false eco-fascist ideas that humans are a “disease” to the Earth, that overpopulation is actually occurring, and Covid is a solution, it paints a picture that not only are disabled people expendable but that it would be the right thing to leave them to die so that the world—or rather, the able bodied people of the world—can live on without any disruptions to their lives.

Eventually, the true danger to the wider population was recognized by most and steps, however late or ineffectual they were, were taken to mitigate the damage from this disease but the underlying thread that the economy is worth more than human lives has remained a constant throughout the past two years.

One death is too many and, as of the writing of this article, we are at almost 840k deaths and millions of lives irreparably changed by this disease—on top of the millions of lives financially destroyed—in the US alone.

Flip-flopping on Covid policy at the federal, state, and local level led to the lengthening of this tragedy, further deaths and infections, further division of the people, and made what could have been a quick, if devastating, epidemic endemic for years or decades to come. And it was all in the name of preserving the economy, or as every business who could get their hands on ad space called it “getting back to normal.”

This idea that the economy must never dip at all ever is not only wrong but down right immoral; it kills people and destroys lives in “normal” times and absolutely devastates them during mass tragedies like the one we are living through now.

We as a society have to stop pretending that we a) can get through this pandemic—or any widespread disaster—with an undamaged economy and b) that it is worth it to do so.

This is impossible to expect and leads to people pushing for shops to open up, putting workers at risk of either getting sick or losing their jobs. And as people continue to say we’re in “post Covid times” this is just going to get worse.

Recently, the CDC published a study looking at underlying conditions, or co-morbidities, that they claim either made someone more likely to die/led to or contributed to their deaths by Covid. This list includes what you might expect such as heart and lung conditions or being immunocompromised but it also includes conditions like depression, ADHD, visual impairments including color blindness, acne, pretty much any kind of physical injury, and even hiccups. The list is extensive and yes, if color blindness Was a symptom of Covid, it would be a bit concerning. But these are pre-existing conditions, meaning people had them before and on top of catching Covid and I can't see how falling out of a tree makes you more likely to die of Covid.

This is information that is being used to justify eugenics pushes right now. After the list was released, Dr. Rochelle Walensky, director of the CDC, went on national television and said:

“75% of deaths have at least four comorbidities…really encouraging news.”

What she said—and what the Biden administration is saying—is horrible on it’s own but what she means is worse; by saying that only those with underlying conditions will die, they might as well be once again saying that it is okay for disabled and sick people to die to save the economy.

But what they really mean by “comorbidities” is “things most of the population of the US has.”

Reading through the list, it's hard to imagine anyone without at least one of these conditions, but the number that have at least four is just as frighteningly high; looking at the list, I lost count at 24 underlying conditions that I, myself, have.

This list of practically useless information is being used to back these questionable claims and it comes not long after the CDC cut the quarantine time in half and recommended not testing asymptomatic people, which will only lead to more people getting sick. Saying that it’s okay to “get back to normal” because only those who aren’t “healthy” will die, allows them to stop putting up protections for those most affected by the pandemic and reduce the number of people eligible for unemployment, food stamps, and/or rent deferments/halts; leaving tens of millions to make the decision to either risk getting Covid and/or bring it home to their household or else lose the ability to buy food or housing— an impossible choice that does nothing to end this pandemic. This will only lead to the continual devastation of the most vulnerable of us before this ends and leave potentially tens of millions of people to deal with the aftermath of having Covid.

Disabled people have been saying Covid was a serious concern from the start, when most of the country was relieved that it would presumably only severely affect us. Since the beginning, we have been continually asked to sacrifice our lives for the comfort of others, before it became clear that it affected the wider population and suddenly it became a concern.

Now, at what far too many are falsely saying is the end, we are once more being told to die so that the country—or rather, the economy— can get back on track. We have always been the first to bear the brunt of tragedy, but now the CDC is throwing everyone under the bus for some numbers on a screen.

By opening the country just as a new variant of Covid shows itself while reducing the tools we have to keep ourselves and everyone around us safe, we are being asked to exchange lives for money most of us will never see and a “normal” that already disadvantaged so many and may be impossible to return to.

Most of the lives spent on the economy will be those most vulnerable in our society—the disabled, the elderly, the poor, the homeless, people of color, and lgbtq+ people—and if that isn’t blatant eugenics, I don’t know what is.