Come for the Boobs, Stay for the Conversation 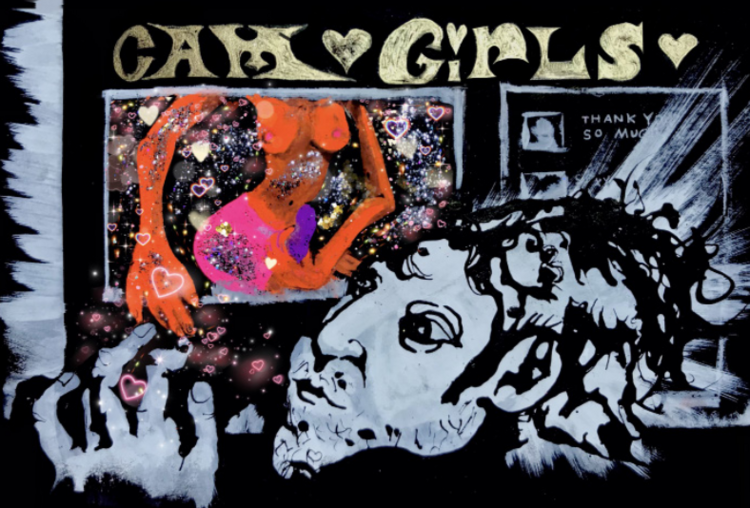 After that description, I’m sure you are thinking that this article is going to be about the vulnerability and intimacy inherent in being naked on camera in front of a group of people. While that is something I’d like to explore in detail, this is not that article. Instead, I want to focus on the non-sexual conversations I had with people while on camera.

My general routine for a standard one-hour show was to spend roughly 15 minutes getting undressed, allowing people in the chat to tell me which articles of clothing to take off, teasing them, showing myself off. Once I was naked, I would sit down and chat with them, answer questions, and perform requests. People brought a lot of different energies to the chat. There were the people who just wanted to virtually catcall me in the chat, which was fine by me. That’s what I was there for, and what I expected. But in addition to that, there were people who wanted something a little deeper than just a pretty, naked trans girl on their screen. They wanted a connection to me, and so they would ask how my day was going with genuine curiosity. And yes, some of the attention they were devoting to me was most likely because of the nudity, but I could tell by their questions that they also had actual interest. Nobody asks about the topic of a research paper if they’re only thinking about boobs.

In addition, when I asked my viewers how they were doing, I would receive real answers—they had just come home from work; they were about to go watch Star Trek with their husband; they had a hard day at their job, but now their day was looking up. People seemed to really want to share what was happening in their lives.

One time, an electrician told me about his daily routine, the licensure to become a certified handyman, and the finer aspects of wiring a house. In fact, we talked so much about electronics that I had to start a private chat with him because I was clogging up the general chat with questions about standard residential voltage levels.

Another time, I did a private show for someone who turned out to be a professor from the UK who taught the history of socialism. We talked about political theory for a bit and exchanged book recommendations. He was particularly interested in the class I was taking on the history of American radicalism, and the primary texts that I was reading for it.

One of the more surprising conversations I had was when a person requested a private show and told me that they were around 60 and had just realized that they might be a trans woman. We chatted for twenty minutes about what it’s like to be trans, some resources they could use if they wanted to further explore their identity, and my personal transition process. At the time I had only recently started my medical transition—if I remember correctly, I was only about 3 months on estrogen at that point—but even still, I had a good few years of experience being out, and even more years of experience being closeted. They asked about how I knew I was trans (which is a topic far too long to include in this article), my coming-out process, and how I felt about my body. Usually, it’s quite uncomfortable when someone questions you about your body, especially as a trans person. But I didn’t feel uncomfortable at all. This online space we were in was built solely for sexual voyeurism. In this context, a question about my trans body was completely appropriate, even innocuous. I’ve encountered a few other contexts that have allowed people to feel open and comfortable enough to have a conversation like the one this person and I had.