This might be a refugee camp, at best it’s warehousing the homeless

In a landscape of warehouses and factories off Garfield Street, The City of Eugene has opened its new Safe Sleep Site for vehicles and RVs. The newly laid gravel landscape has capacity for 44 vehicles and 80 people. On first look the site appears sparsely populated, but managers emphasize that many folks go to work during the day.

The City of Eugene opened its first sanctioned safe sleep site at 310 Garfield Street on October 4th. Residents of the temporary camps set up on 13th Avenue and Washington Jefferson Park were given initial priority to move to the site, with the focus of the 310 location being for long term RV and car parking. It is clear that the city is using the opening of the Safe Sleep Site to justify a new round of parking sweeps but the site’s capacity is a drop in the bucket for RVs parked in Eugene. Indeed police gave a five day deadline for parked vehicles to be moved the day the site opened. Site manager Roxanne O’Brien said, “the site was full the first day and has a 75-person waiting list as well as 10-15 requests daily.”

“When you consider Oregon is 47th in the nation for available affordable housing, the people we do manage to get into housing we use creative solutions, find people they get along with, get them into programs, and that kind of stuff,”

The most surprising thing is that the site only employs two staff members which is in no way sustainable. The city looks like it has gotten itself into a project that could very quickly become a refugee camp. In order for conditions to not spiral immediately, the city is going to need another half dozen full time staff as well as a spread of part time and volunteer workers.

Inexplicably, there is currently no full time case work going on at the site and without a functional office it’s doubtful the situation will improve.

Despite positive intentions by site planners, the safe site appears to have been constructed rather quickly. The stark lack of infrastructure or community space makes the lot feel cold and empty. The two designated warming centers for guests are newly assembled garages with empty concrete floors. The site team is currently unable to use a bus with a commercial kitchen because of lack of funding for food. 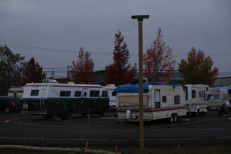 There are three more sites currently being planned and are gearing up for completion, including the large Tyree Oil building next door to the new 310 lot. The Tyree Oil warehouse at 410 Garfield right across the railroad tracks will accommodate between 70-80 residents in tents. Each tent will be provided by the city. Inexplicably, the large Tyree Oil warehouse will not be heated. This situation can not be described in any other way other than warehousing the homeless.

Residents of the safe sight must abide by certain procedures in order to remain eligible for a parking spot. The list of procedures is exhaustive and demands that guests of the site keep their area clean, maintain sobriety, and observe community standards of order. Upon signing the agreement, residents must agree to SVPD reserving the right to change any of the policies “at any given time.”

Many of the RVs on site had to be towed in over the course of several days due to being in disrepair. Once brought to the site, guests are not allowed to repair the vehicle in their parking space. This results in many RVs and cars that are falling apart, with no opportunity to restore mobility.

Despite the enforcement of rules, theft still does occur within the safe site. One guest of the site, Randall, 65, had his bike stolen from in front of his trailer. He was the first guest to arrive at the site on October 4th. “I thought [the safe site] would be more secure than it is,” said Randall. “I’m tired of being robbed.” Randall has had a total of five bikes stolen from him, the most recent of which valued at $800.

Guests of the community expressed gratitude and appreciation towards staff, saying that the workers from SVDP have been nothing but helpful but with only two paid employees and no active casework it is doubtful the site will prosper. 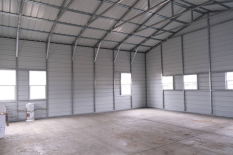 …Oregon is a fundamental cause of the expansive housing crisis my community faces, and yet the institution and its partners evade all responsibility to formally address it. The Crisis: Eugene…

Bureaucracy is More Than a Bitch, It’s a Killer

…Oregon until 1926, and were prevented from renting and owning property inEugene until the late 20th century due to redlining and other discriminatory practices. The impacts of these practices continue…

PANDEMIC ON TOP OF PANDEMIC

…Eugene has the highest rates of homelessness per capita than any other city in the United States, and the City of Eugene has done little to ameliorate this.     We spoke…

Not so long ago Eugene, Oregon was the hotbed of the green anarchy movement: a reputation that resulted in feds kicking doors down in the Whiteaker and the Chicago Tribune…

There is Power in a Union: A Case for the Unionization of University Housing

…potential affordable housing site as an immediate threat to our neighborhood and our public health. We call for Seattle-based Evergreen Housing Development Group to re-sell the controversial site back to…

Over 200 members of the Eugene community gathered at Washburne Park on Friday, February 4th, to participate in a strike for intergenerational climate justice organized by Sunrise Eugene. Morethan 100…

…Courthouse in downtown Eugene. Around 8:40pm protestors began marching through downtown Eugene and headed towards the police headquarters. Along the way, people joined and the crowd quickly grew to approximately…

…groups like Eugene Wake Up suggest are the only solution. We are waiting for the city and citizens of Eugene to respond to this human-rights crisis for the emergency that…