One overcast Friday afternoon, organizations from across campus gathered in the EMU fishbowl amphitheater to participate in Day of Demands, organized by Climate Justice League. The festivities included tabling and speeches, networking, crafts, piñata smashing, and administration bashing. Organizers and attendees demanded that the University of Oregon administration do right by its students and staff, beginning by listening to stakeholders with less power and making meaningful changes in response to their concerns. Day of Demands was an opportunity for students and their representative organizations to collectively protest corruption on campus. 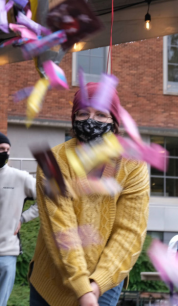 What were the demands?

The intersectional issues that were raised demonstrated the University’s widespread impact on social equity both on and off campus. This range of representation is due to the amount of participating groups: Climate Justice League and Reclaim UO arranged for UO YDSA, Fossil Free UO, Democratize UO, Cops Off Campus, GTFF, Students for Choice, Eugene Community Fridge, Net Impact, Mustard Seed Project, the Student Sustainability Center, Diverse Organization of Business Students, and yours truly, the Student Insurgent, to table and give speeches. The core demands call on the University of Oregon administration to:

These demands epitomize the event’s goals, but the array of groups in attendance approached these demands from various angles. Across the board, the names Michael Schill, UOPD, Phil Knight, and Nike were spat with venom and vitriol- all groups were in agreement that these capitalist interests interfere with the quality of an education at UO.

Climate Justice League’s Fossil Free UO campaign and affiliated groups urged for a shift to renewable energy, citing the irony of a reputably progressive environmentalist institution that continues to rely on fossil fuel investments and infrastructure for its operations. Organizers asserted that it is incumbent that we do not let the University’s phony, hypocritical version of sustainability slide. Several speakers made clear that sustainability does not look like tearing down functional buildings every year and replacing them with brand new ones, hiking property values and tuition rates. It does not look like suckling the tit of one of the most morally depraved companies on the planet. The ethos of this message is that the university’s current model of “sustainability” is a bandage over the gaping wound that is capitalism on campus.

Other organizations emphasized the impact that the university has on the quality of life not only on campus, but in Eugene-Springfield at large. Eugene Community Fridge, for example, explained in an impassioned speech how food justice is environmental and economic justice, suggesting ways the University can better mitigate food waste and distribution to ensure equity. This is intimately connected to housing security and houselessness in Eugene, as groups like the Mustard Seed Project pointed out. The more the campus is treated like an investment for wealthy stakeholders, the more economic inequality increases in the surrounding region. These issues call for the administration to reframe its conceptions of development to account for factors off campus, such as rent spikes and increased housing insecurity. 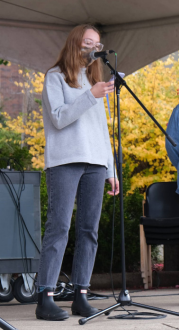 Additional groups aired grievances with the hierarchy and power dynamics that dominate campus. Cops Off Campus (formerly Disarm UO), Democratize UO, UO YDSA, and the ROAR center advocated for student autonomy, democratic (and community based) elections of university board members, and the disarmament and abolition of the UOPD. To our more moderate readers, these calls to action may seem extreme; but the injustices perpetrated by millionaires in the university administration -who are bestowed the power to make important decisions on behalf of students and staff- are far more extreme in comparison, necessitating the ambitious scope of our demands.

Broadly, all of the speeches were intended to spread awareness about the involved groups and the demands they have for the university. Representatives for participating groups rose to the occasion, urging the university to substantially address an array of social justice issues: from the flaws of for-profit public universities to the rallying cry, “cops off campus, cops off earth!”

To engage in the spirit of the season and lighten the tone of the event, organizers arranged for a variety of other fun, community-based activities to take place. Between speeches, organizations tabled and engaged with the community, crafted DIY buttons and painted posters, and even hoisted two piñatas: one shaped like a dead pig head donned with a UOPD cap and the other representing the Board of Trustees. Students and attendees sought catharsis as they flogged the fixtures about, the crowd let out satisfied jeers and cries of delight once the piñatas burst. These tactics proved effective by engaging the public with the Reclaim UO movement in an approachable and festive way.

Throughout the day, passerby generally responded with positive intrigue, and no conspicuous conflicts occurred. Much of the event’s goals were accomplished in its outreach, in part due to location, the number of participants, and its promotion/organization. Most importantly, the day rebuilt affinity group relations that were severed by the COVID-19 pandemic and college online. It succeeded in organizing a large, laterally organized coalition on campus and illustrated the agency we possess as both academics and activists.

While the event fostered solidarity amongst attendees, neoliberal complacency still seems to have an imposing and firm grip on much of campus. Despite the event’s central location, the majority of pedestrians on campus that day simply shrugged and walked past the fishbowl, unmotivated to engage with radical movements at the university. Evidently, our presence on campus is needed more than ever. We must take responsibility for combating apoliticism and apathy at the UO. The college campus has historically served as a catalyst for social and political change; it is imperative that we reignite that legacy and continue to engage with the university community in a way that will work to affect larger policy changes.

We made our demands heard in the heart of campus, but were we loud enough to be heard over the constant cha-ching, dollars being made, ringing in Schill’s ears? Despite being formally invited to attend the event, a reaction or response is yet to be seen from Johnson Hall suits and the Board of Trustees. I suppose this just means we’ll have to keep these actions up until they have no choice but to listen…

Education existed long before capitalism, yet students today seem to take for granted the fact that we possess the economic and social power to sever profit from the American university. As a collective student body, we possess the social capital necessary to liberate the pursuit of knowledge from the pursuit of profit. These possibilities are demonstrated by the commitment of radical organizations on campus to collective organization. The attendees of Day of Demands dared to imagine an anti-capitalist future of college in America, if this energy is maintained we may one day soon see these demands realized.

Over 200 members of the Eugene community gathered at Washburne Park on Friday, February 4th, to participate in a strike for intergenerational climate justice organized by Sunrise Eugene. Morethan 100…

Eugene OR – On March 19th two organizers with Sunrise Eugene, a local hub of the national climate justice non profit Sunrise Movement,put their bodies on the line to stop…

…alarming number of police shootings of people of color, including the 2019 killing of Eliborio Rodriguez. One serious issue that Cops Off Campus is currently working to change is the…

The Prison Project, A Quest for Justice

…only goal, the only gain I seek, is justice, justice for all. But justice in these United States, or at least in the state of Texas, is a rare and…

…environment is pretty punk,” a message that surely their audience that night would agree with. This attitude made them perfect for a Sunrise Eugene benefit show.  Sunrise Eugene’s movement is…

…events calendar shows. Once his visit had been scheduled, Haynes shared the details with who she thought was relevant faculty and staff on November 1, eight days before his visit….

…of forest to this urban center has massive ramifications for issues of environmental justice. In Dekalb County, the South River Forest was used as the site of a prison labor…

Once more into the breach for climate justice: Breach Collective

Breach Collective is the new Environmental Org in town making noise across the environmental and climate justice spectrum. Only officially a non-profit for less than a year, the collective appears…

…later move out mid-way through the year if conditions worsened. Throughout the 2020/2021 school year, the @covid.campus Instagram page diligently compiled anonymous testimony from the campus community about how they…

…high school environmental studies class warned you about climate change and the increase of catastrophic disasters, but not about the intentional incompetence of rich people smiling in suits. Here’s what…

…questions: Who arranged for the CIA to recruit on campus, and why? Most importantly, what can we do to stop it from happening?During a time of resurgence for campus organizing,…

…they might not be aware of listed.  Another current tenant, Kira Burkett, an undergraduate environmental studies student also living in the east-campus neighborhood with two children said, “When we first…

…about the event, opposition was swift. Organizers of the event announced that the venue address and directions will be provided 24 hours before the event in an effort to keep…