This article is adapted from a previous post by the author at Solidarity News, Matthew O-G

Workers at McKenzie-Willamette Medical Center in Springfield, represented by SEIU 49, went on a two day strike starting the morning of Tuesday, October 5. CNAs, dieticians, housekeeping staff, and more struck for fair wages, affordable healthcare, and to stop outsourcing labor. The union is set to return to the bargaining table Tuesday, and if they do not receive an adequate offer from management, they could strike again.

Gypsy Smith is a housekeeper at McKenzie-Willamette and is among one of the 100 workers whose jobs are set to be outsourced on October 24. Smith started her job at the beginning of the pandemic, but says she also knows co-workers who have worked at the hospital for several decades that are facing outsourcing.

“People who devoted their lives and risked [their] lives are being betrayed. [McKenzie-Willamette] just betrayed us, discarded us, and people are being forgotten.”

In addition to the threat of outsourcing, all members of the 400 worker bargaining unit are fighting a 27% raise to healthcare costs over the next three years.

Workers are also seeking competitive wages from their company that received $4.5M in CARES act funds.

Many community members came to support including allied unions and politicians. Members of GTFF, SEIU 503, ATU, ONA, Roofers, UFCW 555, AFSCME, OSEA, OFNHP, and SEA showed their support on the picket line. John Gangl, who works for LTD and is also the recording secretary of ATU 757, remembers when the healthcare workers had his union’s back and finds it important to stand up for these workers now in their time of need.

Workers met Thursday morning before walking in together at McKenzie-Willamette. While the strike has ended, the struggle for job security and a fair contract continues. Union leaders speculate that if management does not give an adequate offer at the bargaining table, workers could go on strike again. 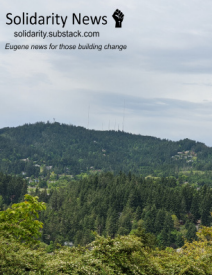 …influx of over 80,000 transients: roughly half of the city’s overall population. That same year, the Oregon legislature passed Senate Bill 1533, which authorized Oregon cities to ordain Construction Excise…

…Courthouse in downtown Eugene. Around 8:40pm protestors began marching through downtown Eugene and headed towards the police headquarters. Along the way, people joined and the crowd quickly grew to approximately…

This might be a refugee camp, at best it’s warehousing the homeless In a landscape of warehouses and factories off Garfield Street, The City of Eugene has opened its new…

…environment is pretty punk,” a message that surely their audience that night would agree with. This attitude made them perfect for a Sunrise Eugene benefit show.  Sunrise Eugene’s movement is…

…involvement in the anti-homeless group Eugene Wake Up.  The activists displayed a banner which read “House Keys not Handcuffs” and delivered a speech by megaphone about Eugene Wake Up’s cruel…

Time to Strike: Democratize the Board

Where is the City Leadership?

…around the nation, we echo those calls in Eugene. Eugene desperately needs increased accountability and transparency for EPD and the City Manager and increased funding to de-escalation services and other…

PANDEMIC ON TOP OF PANDEMIC

…Eugene has the highest rates of homelessness per capita than any other city in the United States, and the City of Eugene has done little to ameliorate this.     We spoke…

On Tuesday September 17th, classified employees at Oregon’s seven public universities voted to strike. This news came from a press release by the SEIU 503 union which represents these employees….

Eugene OR – On March 19th two organizers with Sunrise Eugene, a local hub of the national climate justice non profit Sunrise Movement,put their bodies on the line to stop…

It was the end of October, and the graduate employees at the University of Oregon looked to be on the verge of a strike. The union that represents them, GTFF,…